When I was a kid, I was always excited to learn new vocabulary. Later that day, I was walking with my mom, when I tripped and hit my leg on the ground really hard. I was a crying, bawling mess of a child, to the point I was doing that weird cry, stutter, hiccup noise. I swear to God he levitated: One day, when he was six, I was at his house when he got this absolutely god-awful stomach pain.

I mean, he was literally writhing in pain. She feared something along the lines of an intestinal rupture. About half way to the hospital, my friend suddenly let rip the loudest, most powerful fart any of us had ever heard. I swear to God he levitated. We thought the upholstery in the car seat had ripped. So a couple years I moved out of state with a boyfriend. Was super excited about it but with reason had anxiety about being so far from friends and family.

One of the ways my anxiety was coming out was with nightmares and night terrors. On one particular night I had woken up the sound of our doorbell ringing. Which at 4 in the morning is fucking nerve wracking. So I shook my boyfriend fully awake and told him I heard the doorbell and to go check it because I was scared. He quickly jumps up. Puts on clothes and grabs a bat. Goes all the way to the front door and opens it. I, scared shitless, am peeking around the corner watching it all go down.

I see him step outside and I nervously await the verdict of the situation when I hear him call out to me. The whole school thought I was going to star on Drake and Josh: At first I just told my best friend, but then the whole school found out. I had people coming up to me and asking me for my autograph and a teacher even asked for a picture with me.

So in 8th grade I used to read during class a lot. At the time I was reading an Artemis Fowl book, and for some reason I had two copies of the same book. So one day in my English class we were reading this other book which I had already finished reading three days earlier , I was reading my own book and when it was finally my turn to read, I had no idea where we were.

So the teacher took my book away, I found my spot, read the part and passed it to the next person to start reading. 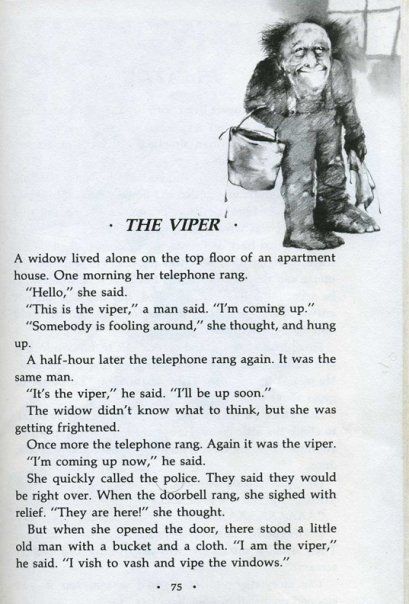 So after I read my part, I took out my second copy of Artemis and picked up right where I left off. So teacher takes a look at me, sees the book in my hands, then back to her desk obviously confused for a second. Now my friend that sat two chairs down from me was also reading Artemis at the same time as me and with a quick look to him he knew exactly what I was planning. He took it out and passed it over without hesitation. I opened to a random spot and just pretended like I was reading. At this point it was just to mess with my teacher. But now at this point I was out of books, and the rest of my class knew it.

So she continued with her lesson and another friend of mine took two of her books and switched out two of the Artemis books on her desk to make them look like they were still there. He passed the books slowly around the room, one at a time, until they were back to me. Then I took one out, opened to a random spot and just kept it open, waiting to get caught. I silently signaled to a few people in class and they started laughing. The teacher looked at what they were laughing at and saw me with yet another book.

She looked at her desk where there were seemingly 3 Artemis books and saw me with a 4th. She took it, walked back to her desk, put it down, turned around, and saw me with the second book that got taken back on my desk!!! The teacher thought she was going to win this game but underestimated my teamwork with my classmates.

So the second she came over to me to take the seemingly 5th book, another classmate took back the other two books from her desk and split them up—sending one to me one way, and the other another way. The teacher was very flustered and laughing hysterically at this point and there was no more teaching going on.

The entire class was also going ballistic trying to see who would win. So at the end of the class she thought she had taken 11 books from me. I took pity on her and told her what was really happening. I told her that I had already read the first book, and all the teamwork that went on. We were both laughing and making jokes. In the end she agreed to let me read my own books as long as I kept track of the actual book we were reading. My younger brother Eric asks if he can take off his pants too and Ethan says yeah, just make sure you have clean underwear on.

The guy proceeds to slowly rub the lotion on his face as the whole class watches him in confusion. Now people call him lotion boy.

Stories to Tell: Selections from the Harry Ransom Center

I never got to eat my Pringles: Okay, so this was in fourth grade, and I was in this class with all these dumbass kids. My parents usually pack me fruit for a snack, but on this day they packed me like half of the leftover Pringles from the day before, you know, in that cylinder container. I started scoping the area, trying to find my Pringles. Moira was this chubby girl in my class that literally ALWAYS wore this purple princess dress that should be classified as a bad Halloween costume seriously and was known for being a bitch. So I stomp out of the class and start searching for Moira.

So after a solid 10 minutes, I find a group of these kids crowded at the side of one of the portable classrooms. I rush over to see what it is. The kids were eating Pringles. So one time I was home alone and it was around dinnertime when I decided to make myself something to eat. Thinking that my parents must have thrown away the box for box tops, I called my mom to ask how long and at what temperature to cook chicken nuggets. She told me both of them, I laid out about 20 on a tray and stuck it in the oven, setting the timer before I walked out of the kitchen.

When it was almost time to get my chicken nuggets, I walked into a cinnamon scented kitchen. I searched all over that kitchen, trying to find the cinnamon scent, leading me to the oven. I decide to turn on the oven light to see if maybe my mom had stuck some cookies in the oven and forgot to bake them, but instead, I find that the tray my chicken nuggets were on has cookies on it instead! Somehow in some form, I had accidentally baked snickerdoodles. And that is why my parents can never take my cooking seriously. Painting a roller coaster: So in my junior year of high school I got a project to make a roller coaster for my physics class.

Everything was going fine until the day my partner and I had to paint the thing. We were in my garage spray painting the tubes and these two guys come marching up to the house across the street and start yelling at the top of their lungs, beating on the door. Well I called the police, closed the garage and parked myself in front of the dining room window. Long story short the police showed up in full gear broke down the door and brought out the two boys at gunpoint. So when I was like 9 I went to this aquarium thing and it was a pretty amusing trip overall.

The next day at school, the teacher asked us what we had done over the weekend. Now normally I never raise my hand. But I did this time. I fucking did it this time. The worst possible time. So when I was in the eighth grade, science class was the most boring hours of my life. I started panicking because the game noises were excruciatingly loud. I kept playing and got eaten by a ghost almost after I pressed the start button my hands were shaking like crazy ….


My teacher and everyone else started laughing and I got so red afterwards. He thought it would be nice to paint the school bus with characters from Sesame Street. At his first stop, there was this very overweight little girl. He opened the door and said, " Hi, I'm the new bus driver.

What is your name? Waiting at the next stop was another overweight little girl.

He said, "Hi, I'm the new bus driver. At the next stop, there was a grown woman and a little boy.

The bus driver said, "Hi, I'm the new bus driver. The woman piped up and said, "His name is Ross and he is my son. The bus driver replied, "No problem. He can have this seat right behind me and I can watch him carefully in the mirror. At the next stop, there was this little country boy standing there.

The little boy was wearing tattered overalls and had no shoes or socks on his feet. The poor little boy had problems walking because of bunions all over his feet. The little boy replied, "My name is Lester Cleese. Later that night, at home, his wife asked him how his first day on the new job was. Home Art Math Business. New Policy in Heaven. Ladies at a Busstop. The Birth of Woman.

The Moral of the Story. Old Lady Who Makes Bets. Golf at Pebble Beach.


Students at the Races. I work with families and organizations to save their history, voices, and stories as audio productions. I use oral history interviewing and documentary storytelling to create audio memoirs and provide families with a timeless collection of their own stories. My mission is to capture well-told, heartfelt stories on broadcast-quality audio that will stand the test of time and even entertain. I have conversations — sometimes deep, sometimes lighthearted — using broadcast-quality microphones and recorders in the comfort of your own home.

Then I turn hours and hours of interviews into story gold — the kinds of stories your family will be clamoring to play on their iPhones. I want my mother to tell her stories so we can always hear her voice. I gave my father one of those books to write his memories…but he never filled it out. I want to help you save your stories and honor your true voice. This is the stuff that matters. When you give someone your story, you give your heart. A love poem to storytelling: