Although she did not begin writing and illustrating children's books until she was 41 years old, Patricia Polacco grew up with storytellers. As a child, she spent much time with her grandparents who shared stories about the different lands from which they came: Her relationships with her grandparents influenced her for the rest of her life.

In fact, in almost every one of Patricia Polacco's books, a very young person interacts with an elderly person. Polacco spent her early years living on a farm in Union City, Michigan, where she now makes her home. When she was five, she and her mother and brother moved to Florida for a brief time before settling in Oakland, California. There she lived for most of her young life on into her adulthood.

What she loved most about her neighborhood in Oakland was the fact that her neighbors came in many different colors and from many different religious backgrounds. Some of these neighbors became models for her story characters. When she was in elementary school, Polacco was not a very good student. Because she struggled to learn how to read and do math, other children teased her and made her feel dumb. When she was fourteen, it was discovered that she had a learning disability called dyslexia.

One of her teachers, Mr. Falker, found out what was wrong with her and got her the help that she needed. He also got the other students to stop teasing her. Polacco's book celebrates the special influence of Mr. Falker in her life. After leaving school, she restored ancient pieces of art for museums. Polacco then became the mother of two children, Steven and Traci, and she devoted most of her days to their education and upbringing. When they were older, Polacco combined her love of storytelling and drawing into writing and illustrating children's books.

With dozens of books to her credit, she continues to work on creating new works for children and all of those who love stories and art. Babushka Baba Yaga Meteor! They got out the car and she could see a trail of smashed glass and the sign of something moist being dragged off into the shadows of the next building.

Horton offered a token argument against her going off on her own but then took the opportunity to scurry off in the opposite direction. Jenkins followed the trail. It was just past midday and the sun was hot and high, but the shadows between these tall concrete buildings were thick and cool. It kept the moisture trail from dissipating and she followed it to an outbuilding the doors of which had been forced. She took a deep breath then stepped into the doorway of the outbuilding. It was dark inside, there were no windows, but she could see the red exposed flesh and jutting bone of the end of a large beef joint on the floor in the light form the door.

Come out so I can help you. Jenkins suppressed a shudder. It was harsher and the words had the edge of an accent. There was the slow, deliberate sound of a bite being taken and the ripping noise of fleshing being torn and then the sound of chewing. There was a sudden noise like a scream but with more anger than fear loaded in it, then a shape leapt out of the shadows. The girl full body weight hit Jenkins right in the stomach and barrelled her over.

Jenkins tried desperately to pull her taser up, but the girl had hideous strength and dug her fingers with wickedly sharp nails into her arm and face. Her face was a hideous mask of fury, desperation and hunger, filthy with blood and meat juice. Jenkins only caught a glimpse before the girl opened her mouth and went for her throat.

There was a yells and a sound of a shot and then the weight was gone from her chest. Horton was there, putting away a gun and helping her up. Come on, we should get you to the ambulance. You have to accept that shock and stress must be having more of an effect on you than you think. He pulled it up and read the screen with a heavy frown. She staggered from the bed and padded to the doorway. But no one was listening. A few patients stood round looking confused. Support workers were trying to usher people back to their rooms. Jenkins blinked at the wood. Her skin still felt clammy and her stomach felt more like a sucking void of nothing than ever, but something else was causing goose pimples to ripple across her skin.

She grabbed her mobile off her nightstand.

She dressed herself quickly and left her room. She hurried down the bleached white corridor, sweating. She had to pause to lean on a rail at the top of a set of stairs. Her stomach cramps were worse than ever. But she forced herself to move on. She climbed the stairs, looking anywhere for a way out. There was an alarm going off, but it was distant and intermittent. The corridors were strangely empty. There was a vending machine on the next landing down and she ran for it before she was even thought about what she was doing.

She forgot everything in the struggle to get coins out of her pocket with her shaking hand. She came back to herself sat on the floor, gnawing on the inside of the empty crisp packet, the yawning sensation inside her more prominent than ever. She tossed it away t and scrabbled away from it like it would bite. She sat against the wall, staring at the empty packet, holed where her teeth had gone through the foil.

The vending machine hummed away and took an amount of strength that made her sweat not to rush over to it and smash it open. She froze when she heard light footsteps coming up the staircase. The alarm had silence and the air in the stairwell was still. Rhiannon stepped into sight.

Her feet were bare. She was in a hospital down. Her skin was greyish, her blonde hair hung round her face like ropes, lank and colourless.

Her eyes had gone from brown to black, gaping like wells. It was like she was in her skin. Police cars were pulling up at the entrance when she staggered out. She slipped through the crowd of confused a worried-look staff, patients and visitors clustered at the entrance, not wanting to be recognised by any of her colleagues.

This is so good.


My small food for thought — you have been in novel writing mode, and as you well know there is a totally different vibe to a short story. Or you could get a little more detail about the history of the box. As this is now, depending on where you want to go with it, you have at least a page novel here. Such a fantastic idea. If I can get a little more detail in about the box earlier that would be a bang on ending! Thanks Ken, you are a genius!

But the really good ones get in get out make your point quickly and leave you dazzled. Jex, this is fantastic!

Baba Yaga is a favorite of mine. I think the earlier commenter had a really good idea about ending it as well, but if it happens to develop a part two, I would be all over that. Collyer Science Fiction Writer.

So draw the curtains, turn the lights down low and put on some suitably atmospheric music! Go clean up your box, please. But we did let her have meals out that box for that first week. What did she say? Nothing is your fault, you hear? You need to make room. The woman, if possible, paled further. Back up is on its way. Are you in there? Have any alerts come in from my hospital? This entry was posted in Musings on Writing and tagged baba yaga , fiction , halloween , halloween fiction , horror , horror story , romania , romanian folk tale , short fiction , short story. 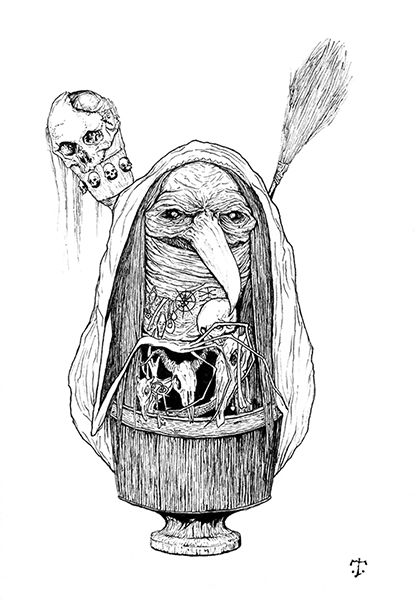